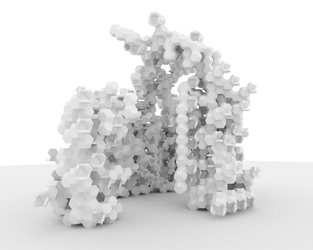 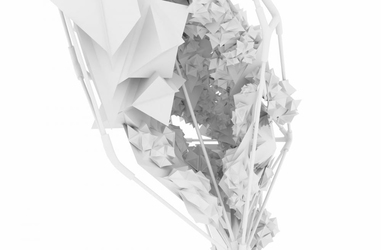 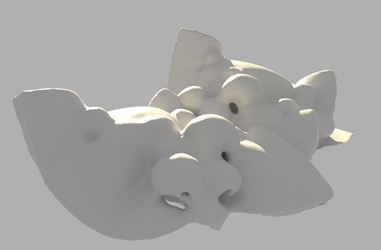 About the Academy of Arts, Architecture & Design in Prague (UMPRUM)
The Academy of Arts, Architecture & Design in Prague was founded in 1885. Throughout its existence it has ranked among the best educational institutions in the country. It boasts a number of successful graduates who have gone on to become respected professionals, garnering acclaim beyond the Czech Republic. The school is divided into the departments of architecture, design, fine arts, applied arts, graphic and theory and history of art. Each department is divided into studios according to their specialist area. The studios are all led by leading figures of the Czech art scene. Twice a year the school opens to the public for a presentation of student work, entitled “Artsemestr”. Each year the school organises over 15 exhibitions, half of which are shown abroad. Prague UMPRUM is the only Eastern European school that figures in the indices of prestigious European and world art schools.

Acoustic Cave is an object on the verge between architecture, interior design and art installation. Assembled of 240 paper/foam composite components, it creates ambiguous space for contemplation, communication and observation.

Soft Landscapes project is an attempt to use various form-finding techniques to create furniture with tectonic qualities. Made out of laminated poliurethane foam, it combines soft surface with a hard shell.

Philharmonic caves are two architectural projects, aimed at new definition of the philharmonic space, which grows from the inside. Cave, as an archetype of the inside without an outside, provides an inspiring new typology as well as a new design language.

Acoustic Tiling is a project, which tests new materiality as well as morphology. Ceramic foam panels start as a highly ordered and organized pattern and transform into cracked deconstruction of a wall, providing diffusion both for the sound and for the eye of an observer.

Cellular structures test different topologies through the repletion of one cellular space-filling component. Their various characteristics, such as transparency, elasticity or rigidness are implemented within the fields of fashion design or architecture.

ACADEMY OF ARTS, ARCHITECTURE AND DESIGN IN PRAGUE - UMPRUM