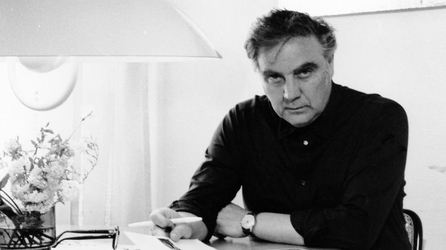 For the 50th anniversary of the Cobra lamp by Elio Martinelli, his company is presenting a monographic exhibition on his lamp designs, in order to retrace the creative moment that brought both his and Martinelli Luce’s names to the attention of the design world.

On occasion of the 50th anniversary of the Cobra lamp designed by Elio Martinelli, his company presents a monographic exhibition dedicated to him and his work in the spaces of the Galleria dell’Architettura.
The exhibition is hosted in three rooms. The first presents re-readings of the Cobra lamp, one of the most compelling in all of Elio Martinelli’s production, revisited by 23 authors: designers who collaborate with Martinelli Luce and several friends.
The second and third rooms illustrate the path taken by Elio Martinelli as designer and entrepreneur, the creative moment that brought Martinelli himself and Martinelli Luce to prominence, through the lamps he designed – such as the Cobra, the Foglia and the Serpente – and his collaboration with designers such as Gae Aulenti, Sergio Asti and many others, all testimony to his exquisite attention to the production of his times from both the industrial and artistic perspectives – a philosophy still embraced by the company.
The exhibition continues with designs from the Seventies to the present, illustrating Elio Martinelli’s ability to interpret the changes in the world of design and in the taste of the public, always with originality and never succumbing to the whims of fashions.
The exhibition does not intend to provide an exhaustive summary of Martinelli’s thought and approach to design in over 60 years of activity in the field, but it aims to offer a tribute to a designer who, as a planner and manufacturer, greatly contributed to the diffusion and standing of Made in Italy design worldwide.