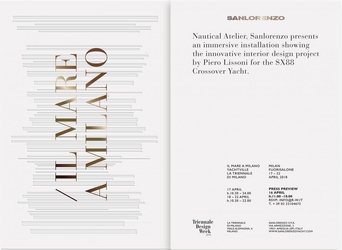 Constantly innovating, contaminating and widening one’s imagination and opening oneself to the creative language of art and design so to create unexplored, unexpected connections between seemingly distant worlds, which yet reveal similar expressive forms: this is the unique approach which has allowed Sanlorenzo shipyards, topping world charts among the producers of yachts exceeding 24 metres, to revolutionise the concept of living on board, interpreted this year through a new scenographic installation which will be presented at Milan’s FuoriSalone, an event to which the company has decided to take part for the second year in a row.

A proper boating atelier, once again Sanlorenzo attends the main event in the world of design with its project “Il mare a Milano: Yachtville” (The sea in Milan: Yachtville) taking place at Milan’s Triennale, from 17th to 22nd of April.

Through a consistent, transversal path, which has led the company to gradually enter the world of art and design by directly participating in some of the major events related to these fields, the company returns to Milan with an installation that represents an evolution of the concept presented last year, in order to allow visitors to learn more about Sanlorenzo and what has made it so unique in the world of boating.

Alongside the participation to FuoriSalone, Sanlorenzo announces the beginning of its collaboration with Piero Lissoni acting as Art Director of the company. The great stylistic and projectual affinity that has immediately emerged between the designer and the Italian shipyard, which last year resulted in the interior design project for the new motoryacht SX88 presented at Cannes Yachting Festival 2017, culminates today with the decision to start a new experience together that, supported by the company’s expertise, aims at creating new potential scenarios for boating design. A major milestone for the company which once again goes to confirm its well-defined direction that connects it more and more to the world of design.

Loosely based on the scene design adopted by director Lars Von Trier in the film Dogville, where the buildings in a town are shown through a plan view by using graphic two-dimensional delimitations, the installation “Il mare a Milano: Yachtville” displays the groundbreaking interior design project signed by Piero Lissoni for Sanlorenzo’s yacht crossover SX88.

At the exhibition of the Triennale, the silhouette of yacht SX88 is graphically highlighted on the floor through an abstraction of internal areas. The only aspects which emerge from it are the connotative elements of a style, a way of life, where items belonging to furnished settings are theatrically placed: visitors are invited to board the yacht, moving freely from bow to stern inside an area which reproduces the open-space living/dining environment of SX88 through actual furniture items, produced by such internationally-renowned design companies as Boffi, Cassina, Knoll, Living Divani etc, chosen by Piero Lissoni to give the interior design project a domestic vibe.

The perimeter of the boat represents the token membrane that separates visitors from the outside world, which is made up of a set of unreal urban landscapes combining the architectural elements of many world cities. Sanlorenzo’s yacht peacefully sails on metaphorical seas, crosses imaginary boundaries, contemplates dreamlike cities, reflecting its outline on the surface of buildings while slowly flowing through space, on both sides, leading visitors to feel like they are moving with it, travelling aboard the yacht to unknown destinations.