LIGHT IN THE DARKNESS 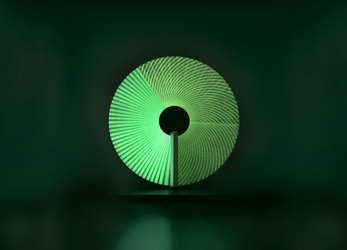 OFFICINE PANERAI CELEBRATES ITS PASSION FOR THE SEA AND FOR INNOVATION

THE SYNTHESIS OF TIME, LIGHT AND THE DEPTHS OF THE SEA EXPRESSED THROUGH DESIGN

Officine Panerai is exhibiting for the first time in Italy, Candela, the work created by three multi-disciplined British talents working together: the designer Felix de Pass, the graphic designer Michael Montgomery and the ceramicist Ian McIntyre.

Previously presented at the world-famous Victoria & Albert Museum on the occasion of the London Design Festival, Candela is being exhibited from 17 to 22 April at La Triennale di Milano within ‘Light in the Darkness’, the installation which offers a new view of the concept of time and light, summarising all the values intrinsic to Panerai: design as both a vocation and as an element of research and innovation, time and its continuous flow, and the luminescence which has been a feature Panerai watches since the beginning, responding to the demands of the commandos of the Royal Italian Navy.

It is an immersion into the darkest depths which articulates the imaginary journey towards the shimmering of Candela, the name is that of scientific unit measuring luminous intensity.

The installation consists of a slowly rotating circular framework suspended above the gallery floor. With the passage of time, the disc passes through a concentrated discharge of light which causes it to emit a glow which fades little by little, until it disappears altogether. All this is possible through the marriage of analogue and digital technologies using materia ls with light-creating properties.

Forming part of the installation are Submersible watches with their uniquely distinctive technical characteristics and design. Solid, strong and with unequalled visibility even at great depths, every Panerai diver’s watch is inspired by the past of a brand whose roots are in the world of the sea while it also looks to the future, with excellent new technical solutions and remarkable innovations.

As a tribute to this tradition of excellence, Panerai has for many years sponsored a series of initiatives aimed at promoting the culture of design. In this way many international collaborative projects have come into being, such as the partnership with the Triennale Design Museum in Milan on the occasion of the exhibition “O’Clock”, the retail concept of the Panerai boutiques created by Patricia Urquiola, and the sponsorship of initiatives such as Design Miami (US), the London Design Festival and the prestigious Wallpaper Design Award (United Kingdom). This is a commitment which is growing year by year, confirming the part played by Panerai in the world of international design. To reinforce its longstanding relationship with the world of design, Panerai has donated the work Candela to the Triennale which will thus become part of its permanent collection.