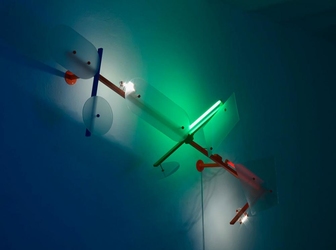 Among the various projects that will be hosted at Meazza, 5Vie pays tribute to the work of Nanda Vigo, undisputed protagonist of the current art scene. Two “Goral” totems dating back to 2005 will be presented. These two obelisks are equipped with neon lights representing the cosmogonic alphabet’s elementary signs, a simple translation of the more complex “Goral”, which in Buddhist philosophy represents the light of creation, while on its sides light sculptures will be shown, that is to say the “Light Trees” of 1984. Moreover, the movie “Go with the light” by Marco Poma/Metamorphosis will be previewed. It collects a series of interviews registered during travels and exhibitions, from to 2005 to 2017. At Archivio Nanda Vigo in Via Gorani 8, sculptures titled “Deep Space”, 2013, will be exhibited. Their triangular nature and the soft radiation they release create an impression of immateriality that projects them to an interstellar space.