‘PLAY TO THE GALLERY’ – JUNG on stage in Milan 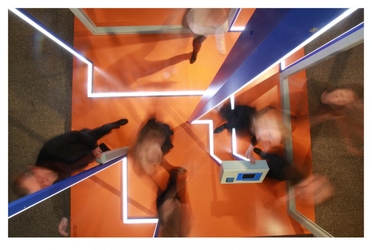 ‘PLAY TO THE GALLERY’ – JUNG on stage in Milan

LS 990 is the classic model among flat switches: Launched back in 1968, today, half a century later, it is still immensely popular thanks to its ageless elegance. To mark its 50th anniversary JUNG is presenting its iconic switch under the motto ‘PLAY TO THE GALLERY’ during Milan Design Week 2018.

From April 17 to 22, 2018 JUNG is inviting visitors to its presentation ‘PLAY TO THE GALLERY’ in the Brera Design District (Via Statuto 16). The installation is the result of a collaboration with Detmold School of Architecture and Interior Architecture under the supervision of Prof. Ulrich Nether and Ricarda Jacobi. The design team comprises Sarah Gmelin, Marielle Kanne, Mona Makebrandt and Marisa Spieker.

‘PLAY TO THE GALLERY’ – revealing the invisible
On or off, open or closed, warm or cold: Our everyday lives are inconceivable without devices
for regulating lights, blinds or room temperature – switches and other control systems. Indeed,
we generally take for granted the usually unobtrusive little assistants of modern building services,
which make life safer and more comfortable. ‘PLAY TO THE GALLERY’ reveals the invisible and in a playful manner gives us an opportunity to intervene in the interplay of switch, circuit, light and sound. What is normally visible is the switch, which is touched, albeit unconsciously, umpteen times a day. The system and wiring typically remain hidden. The square-shaped LS 990 is the protagonist in the ‘PLAY TO THE GALLERY’ installation. When a visitor operates the switch, a long-exposure photo is shot. During exposure a strip of light points the way to the camera. The photo, which is taken from a bird’s-eye perspective, captures the interaction between human and system.

‘PLAY TO THE GALLERY’ – interactive devices deliver fascinating user experiences
Additional devices enable visitors to experience the connection between the various elements first-hand: By activating and switching on one or several of the installation’s elements, the visitor
can set off an entire sequence of scenes. Human intervention effectively transforms ‘PLAY TO THE GALLERY’ into a fascinating interactive experience. The switch, the circuit, light and sound are all part of the system; they complement each other or are mutually dependent and make up a larger whole.

With its three-part form, a swing imitates a tactile sensor. A carousel mimics a series switch by means of a divided square. A seesaw recalls the motion of a toggle switch. When the devices are used they begin to light up and also trigger a series of sounds especially composed for the project by sound artist Stéphane Clor – sounds that are influenced by the rhythms of movement.
Tags