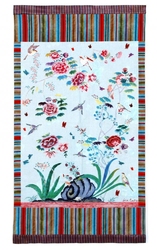 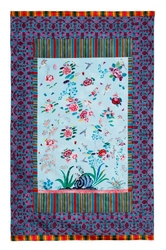 For Milan Design Week 2018 Lisa Corti is presenting Royal Palace, the new series of tapestries created by the Milanese designer.

For Milan Design Week 2018 Lisa Corti is presenting Royal Palace, the new series of tapestries created by the Milanese designer. In the Home Textile Emporium headquarter in Via Lecco and in the new space in Via Gian Giacomo Mora in the 5Vie District, you can view the four limited-edition tapestries inspired by the decorations of Phra Borom Maha Ratcha Wang, the Grand Palace in Bangkok.

Tapestries, like diaries composed of images, recount the splendour of a trip Lisa made to Thailand. Captivated by the marvellous complexity of the great buildings of the Palace, she was attracted by something very special and absolutely original in respect of the rest of it: all the base of a temple is entirely covered in eighteenth-century Chinese floral tiles, something wholly unrelated to the rest of the architecture and decorations. The inspiration for the new Royal Palace design was immediately born of this, a design in which dahlias, hummingbirds, butterflies and plant insets stand out in the middle of the tapestrie and, with their warm pastel shades, refer back to the gentleness of Chinese painting and the sunny banks of the Chao Phraya River. But there is still a throwback to Lisa Corti’s iconic designs – stripes and damask – that frame the central image, bringing out and enhancing the whole composition.

The tapestrie becomes like a work of art to be hung on the wall, made using blockprint, the technique of manual printing on fabrics that is over a thousand years old, from which every Lisa Corti creation derives its energy.

As well as Royal Palace there will also be another product on display, a tapestrie from the Jungle Banano collection: small stylised Tibetan tigers surround banana leaves from which a bunch of roses emerges. From this starting point the entire Jungle Banano collection developed, moving, in its warm and cool variations, into all household products, from cushions to mezzeri coverings, tablecloths and much else.

Cultured and refined design united with precious fabrics carefully made with craft techniques that, in a certain sense, take us back to the places in which they were produced, enabling us to savour their spirit, mood and atmosphere.