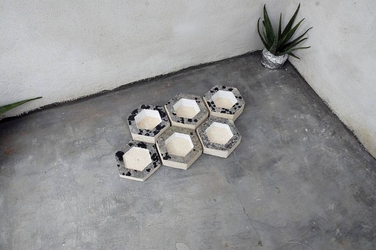 On the opening of the second store in Milan coinciding with the Milan Design Week, ottod’Ame shows “Calcarenite Series”. The exhibition with a selection of works by the designer Cosma Frascina is on display in the heart of Brera, in via Solferino 1.

Protagonists of the show are objects in calcarenite, an element of matter intimately linked to nature, but to the designer’s materials and land of birth, too.

The attention of Cosma Frascina has focused on this “poor” material, a product of nature. He has chosen to work and give new value to this extraordinary element with its chromatic changes, the formation of real natural textures, the visible signs of the action of time and atmospheric agents.

The project by Cosma Frascina aims to experiment new processes of work on the calcarenite material, where “actual inspiration can be found in the nature and structure of the material itself, more specifically, the effect of natural erosion by atmospheric agents over time”.

This way “Calcarenite Series” becomes a tactile bridge between past and present, landscape and interior. The collaboration with ottod’Ame is a reality thanks to these elements ensuring contact with the brand’s soul. In fact, the collections thoughts for the nomadic, curious and cosmopolite women focus on modernity keeping a keen eye on the past.

Symbols of the ottod’Ame prints are a trait-d’union with the objects on display, which are characterized by strong materiality, intrinsic fragility and the chromatic contrast between the outer layer and the result of processing.

A combination that gives voice to the dialogue between the ottod’Ame space, rich in natural elements, and the objects created by Cosma Frascina.

The exhibition “Calcarenite Series” is on display from 14 to 22 April 2018 at the ottod’Ame store in via Solferino 1.