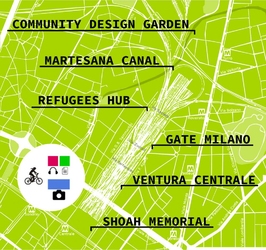 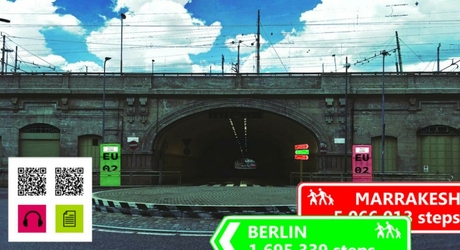 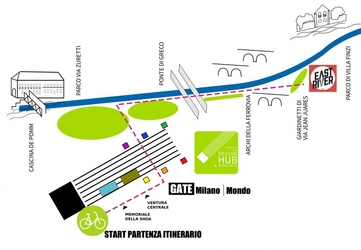 The theme of the site-specific installation GATE MILANO|MONDO is migration flows-frequently involving entire populations-. Over the years, the Milan Central Station site becomes a staging point for thousands of people on the run from difficult countries and looking for a new hope in Europe.

GATE MILANO | MONDO shows the distances, travelled and to travel, measured in steps. The installation is at the mouth of the railway station tunnels that open up paths in the walls of railroad embankments whose penetrability has a symbolic value today -while there is much talk of walls.
The construction of the Gate is the result of a design by Studio Corsaro, active arm in event field, that has come to be known during the first edition of the Fall Design Week; during that event Studio Corsaro placed white dummies on the front of the Municipal Market of viale Monza. The Gate is a stop of MarCO. “Who is MarCO?” is the campaign for take-off the program of CentraleFSdesignHUB 2017. MarCo is the acronym for Martesana Centrale Outdoor: a route done in stages, from the Shoah Memorial to the yard of the Community Design Garden over the Martesana, via the new Ventura Centrale location, crossing the rail tunnels and the installation GATE MILANO | MONDO.

For each stage, there is a description and a piece of music that are available using QR-codes located on the path.

AARCH-MI
(www.aarch-mi.com)
architecture firm socially conscious with a cultural association, founded in 2014. It carrys on projects to protect and to enhance the territory with specific operations. One of these projects is CentraleFSdesignHUB, a series of intiatives proposed every year simultaneously to the Fuorisalone, in the site between the Milan Central Station and the Martesana Canal. This year is the Fourth edition of this project.

all events of the Community design Garden are free entry with reservation: https://www.eventbrite.it/e/biglietti-community-design-garden--33143446942