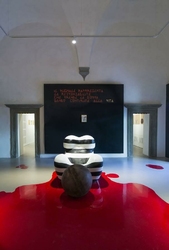 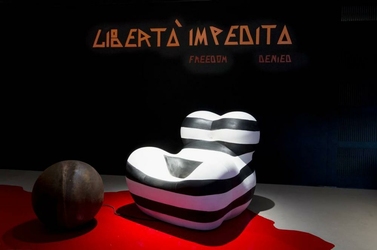 Gaetano Pesce, in collaboration with the anti-violence NPO Center Artemisia, and the support of Gobbetto Resine and Associazione Commercianti di Via Fiori Chiari and RobertaeBasta, present a great monument to Woman on via Brera. A synthesis of sculpture, design, fashion and social condemnation, it forces us to reflect on the rejection and denial suffered by the female population of the world.
Opening: April the 6th from 6 pm. Entrance upon invitation. robertaebasta, via fiori chiari 3, 20121 Milan.
The enormous piece Up 5, a giant rendition of the famous chair with voluptuous feminine features, the first industrial object carrying an explicit political message, a true icon of global design, strewn with women’s clothing, embedded in resin, previously worn and used by women from every corner of the earth, exemplifying that its message of condemnation is valid everywhere.
The giant chair, inspired by the archetypal shapes of the Venus figurines of the Paleolithic era, is tied or rather chained, to its pouf, Up 6, the “ball and chain” symbol of the male bias which, exactly like a weight, makes her tired, hampering all of her forms of expression.