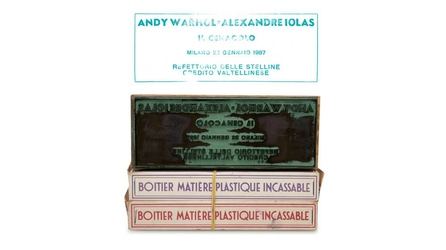 150 posters, catalogs, invitations and photos of the preparation for 30 years of Creval gallery’s exhibitions. With video installations and cover-movie to narrate a project of visual identity started with Andy Warhol- Refettorio delle Stelline, “The Last Supper” January,11,1987- and more and more connections between multichannel, artistic collaborations and site-specific actions.

On the occasion of the 30th anniversary of the first exhibition at Refettorio delle Stelline (January 22 -1987: Andy Warhol. The Last Supper) inaugurated by the Pop Art’s icon himself, with a site-specific installation dedicated to the Cenacolo Vinciano, the Group Credito Valtellinese wants to reaffirm its commitment to contemporary art through the ‘visual history’ of more than 200 expositions produced in its five galleries.

A Visual Story is the subtitle of the exhibition, curated by Mario Piazza, which focuses its attention on the theme of the narration to deal with a dual repertorial collection about the visual identity of Gallerie Creval: firstly, the material one, made up of a 150 print selection among posters, fliers, book-objects, invitations and catalogues printed locally or by the main international publishers - in thirty years of exhibitions; secondly, the virtual one, reproduced in the space through a looping projection in live scale, to illustrate to the public the spacial translation of the visual codes themselves.

The succession of the authors’s of this "visual story" on this axis, be they graphic-artists, artists or curators happens in Wharol’s shadow- forerunner and founder of the whole progeny- that in 1987 was managing the well regarded magazine Wharol’s Interview to carry on with the formal uprightness of Leonardo Mondadori’s graphic office for the first catalogues under Philippe Daverio’s coordination (until 1992), with Donatella Volontè and Massimo Negri’s iconographic heterogeneity of the Kriterìon agency (for the publications edited by Mazzotta until 1995) and the "Helvetic style" of Marcello Francone, art director of Skira in the second half the 90s, when a specific series was dedicated to Stelline’s catalogues.

From the first years of this millennium, the corporate cluster of by now five galleries- Milano, Sondrio, Firenze, Acireale, Fano - has developed from a structure of inner production in Fondazione Gruppo Credito Valtellinese (with the design of Leo Guerra and the coordination of Cristina Quadrio Curzio) but opened towards the outside.