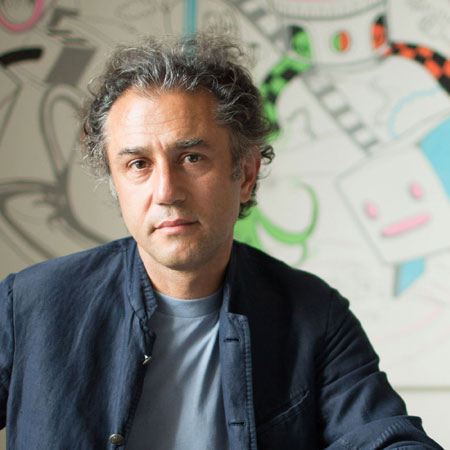 “Mr. Limosani, I am not so sure to have entirely understood what your job is, but I must compliment you because you are really great at what you do”. Felice Limosani loves to call himself a “digital storyteller” and all his projects go in the same direction, between art and branding, always in the spirit of spectacular storytelling. Design thinking is his creed, what led him to create installations all over the world displayed in retails, events, public and private spaces.

It is just like saying, thinking out of the box, being out of your mind!

The version of Felice Limosani about Fuorisalone

It exactly means “fuori” (-outside) the salone del mobile (-furniture fair), something that goes beyond the mere product display, whether industrial or hand-made. It is just like saying, thinking out of the box, being out of your mind!

I think it is the most significant event, as it celebrates the city as a hub of creativity, innovation and contemporary design language. In this respect, I am a real fan of Milan because I like well-deserved achievements better than purchased ones.

Your favourite corners during the Design Week
_

Nilufar in Via della Spiga is a place I feel a special empathy with. I recognise their ability to tell old stories in a new way. I am always deeply moved by their idea of aesthetics and beauty in general. With the Fuori Salone and the Ventura Lambrate area, I always take a chance to visit Hangar Bicocca and the unmissable Galleria Wunderkammern in Via Ausonio.

…expanded the culture of patronage to allow projects to emancipate from sponsors’ business logics. I thing my job is a proof of a renewed approach focusing on design thinking, communication and art.

The most important thing you learnt during the Design Week
_

Design is a horizontal rather than vertical concept. It goes beyond the mere idea of giving objects a shape and can be a way of viewing things. With design you can create new products, but also new thoughts, new ways of doing things.

Inside or Outside the Salone?
_

Both! Each situation in life, just like the inside and the outside of the Salone del Mobile complement each other. As an ex deejay, they remind me of LP’s A and B-sides. The rest is up to my curiosity, my imagination, and my creativity.

The one I had with two wonderful women I really love and appreciate. Gisella Borioli, who gave me her trust before anyone else could even think about it and Gilda Bojardi, who understood before many others what the job of a digital storyteller is about. Two wonder women. Two real stars.