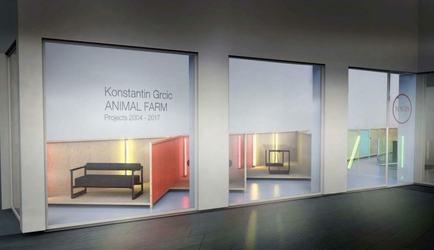 Animal Farm: exhibition curated by Konstantin Grcic dedicated to the products designed by him for Magis

Coinciding with the Milano Design Week, the Magis Showroom in Corso Garibaldi will host an exhibition entitled Animal Farm (running until 22 April) curated by Konstantin Grcic, and dedicated to the products designed by him during the years he has been working with the company: from Chair_One, the first product developed for Magis, which soon became a real icon, to Ettore, the cast iron mule developed for Magis' 40th anniversary. The mule has been the company's symbol for years, reflecting its humble and tireless spirit, which keeps going even when the road becomes steep.

A life-size Ettore will be produced for the store windows.

On 4 April an event will be held as exhibition opening – by invitation - and will attended by Konstantin Grcic, as well as numerous guests.