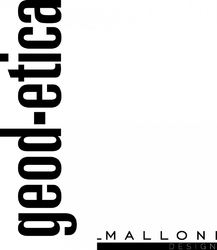 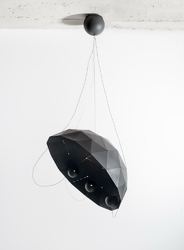 During Milan Design Week 2017, Malloni Design introduce the new GEOD-ETICA Lamp, designed by Lorenzo Malloni. The lamp is an object of design and decor designed to support following the earthquakes happened in the central Italy during the 2016.

Geod-Etica Lamp will be show during the Fuorisalone at the Boutique Malloni Corso Venezia 21.

The lamp has been designed with double utilization, as a pendant lamp or as a standing lamp laying on the floor. The light source finds its place in 3 different and independent spheres, which activate through the contact itself with the lamp’s surface; their placement is up to the user, due to the fact that the magnetic hooking gives several possibilities to the light beam direction. The structure of the Geod-Etica Lamp is made of a metallic sheet of 1mm, laser cut and manual folding to active the geodetic shape with a 50cm diameter. The light points are made of metallic spheres where little led projectors of 2 watt each stand; the ignition starts with the spheres metal hooking to the structure.

MALLONI Design coordinated by the Architect Lorenzo Malloni is part of the productive of  the Maison Malloni. The company owns the fashion brands _MALLONI and IXOS.