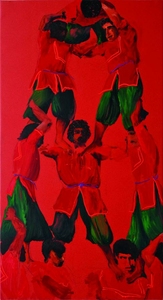 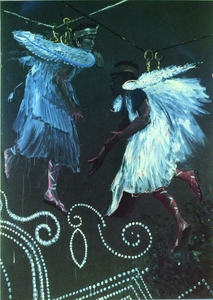 The irony, the tyranny of Western cultural icons and the Orient in Aldo Mondino’s linoleum paintings.

Gracis and Matteo Lampertico Galleries are pleased to present, in association with Giovanni Martino, an exhibition of late works by Aldo Mondino (1938 – 2005), showcasing his seminal paintings on linoleum. It is accompanied by a fully illustrated catalogue with a critical essay and a memoir by Gian Enzo Sperone. This exhibition focuses on Mondino’s last major body of work, begun in the mid1980s. Possessing extraordinary narrative eloquence and sustained formal exactitude, the linoleum paintings – occasionally punctuated by three-dimensional additions – at once synthesize and expand the predominant themes in Mondino’s oeuvre: irony (what better play on words than linenand oil), the tyranny of Western cultural icons and their mythologizing functions, and finally the ‘Orient,’ with its cultural and deeply personal connotations.

These are fuelled by Mondino’s relentless traveling, which, starting in the 1980s, brings him into contact first with Morocco and the rest of North Africa, and later Turkey, Spain, Israel and Palestine. Simultaneously, Jewish culture and its symbols become a recurring concern as Mondino rediscovers his religious identity.

Reducing Mondino’s voyages to mere cultural nomadism would be a mistake, however, for it negates the subversive dimension of his paintings; ambiguously revealing of the problematic connotations of tourism and mass travel. Furthermore, a similarly critical outlook takes hold in Mondino’s approach to his native context, essentially disrupting the stability of predominantly Western-centric art-historical narratives.