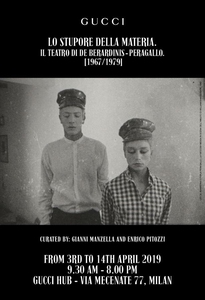 Leo and Perla, the inseparable twins of contemporary theatre, innovators of stagecraft, which they transformed into a multimedia reality show about life and their own feelings, are the protagonists of the exhibition ‘Lo Stupore della Materia. Il Teatro di de Berardinis – Peragallo [1967/1979]’, curated by Gianni Manzella and Enrico Pitozzi. The project is a follow-up to the celebration of the two artists, pursued with determination by Alessandro Michele, on the occasion of Gucci’s Spring Summer 2019 show.

The exhibition is structured around reconstructions and simultaneous evocations capable of celebrating the two masters’ visionary duality and inimitable showmanship, as well as their provocative and transgressive behaviour. The visitor moves through film clips, sounds, music, photographs and stage props that tell the story of the most powerful and significant years of their artistic, human and romantic partnership. The show celebrates a creative, ethical and political stance: rebelling against the establishment, represented by Italy’s Teatro Stabile institutions, the two artists pioneered a form of theatrical spectacle that transcends text and performance to become impromptu writing, self-expression, mimesis and interaction with its surroundings and with ordinary people.

The show ‘Lo Stupore della Materia. Il Teatro di de Berardinis – Peragallo [1967/1979]’ spans the experimental works of the ‘60s, defined by the couple as “theatre as error”, such as La faticosa messinscena dell’Amleto di Shakespeare, Sir and Lady Macbeth and Don Chisciotte (the latter with Italian actor and playwright Carmelo Bene), right up to the ‘70s with the film “A Charlie Parker”, where Perla’s passion for opera merges with Leo’s idiosyncratic love of jazz, and their Teatro di Marigliano experience. In the post-‘68 years, marked by artistic and political activism, Leo and Perla moved to the small town of Marigliano, in the Neapolitan hinterland, to get in touch with the roots of popular theatre and language, transforming their theatrical practice into ‘diagnostics’. Indeed, as Leo de Berardinis, quoting Pound, remarks in an interview, “there are two kinds of art – one is diagnostic. The second is therapeutic... our theatre is diagnostic, it makes diagnoses, it strives to show where the rot lies… evil not as sin, but evil within history...”. That period and that context give birth to rousing productions, such as ‘O zappatore, King Lacreme Lear Napulitane, Sudd, Chianto ‘e risate e risate ‘e chianto, Rusp spers, and De Berardinis – Peragallo, in which Perla reinvents herself as performer in Eduardo De Filippo’s Filumena Marturano. In that same period, films such as Compromesso storico a Marigliano chart the artists’ influence and their dialogue with their surroundings.

Alessandro Michele’s choice to work with Gianni Manzella and Enrico Pitozzi on this project stems from a shared desire to draw attention to the ethical and aesthetic value of Leo and Perla‘s work. When theatre is in danger of leaving few traces, because of its refusal to identify with a frozen, definitive time period, leaving no room for manoeuvre and brokering no change, then it is time to summon memory. Today this memory feels like the passing of the baton, carries the flavour and the responsibility of heritage being handed down. After all, a memory – and this explains the urgency and the motivation behind this event – can only be for the future, opening up and bringing to life the archives to which it has been consigned.

The show is part of a series of cultural initiatives and productions that Gucci and Alessandro Michele have developed for the Gucci Hub in Milan, which recently hosted the performance MDLSX by MOTUS, with Silvia Calderoni, and the performance of ‘to a simple, rock ‘n’ roll … song.’, with Michael Clark.

Staged with curtains made of strips of black-out white canvas, which hang from the ceiling and cascade in soft folds to the floor or on 3D polystyrene shapes, offering visitors easy access to the various displays, the show ‘Lo Stupore della Materia. Il Teatro di de Berardinis – Peragallo [1967/1979]’ pays homage to a world and a period that are as fascinating as they are unique.