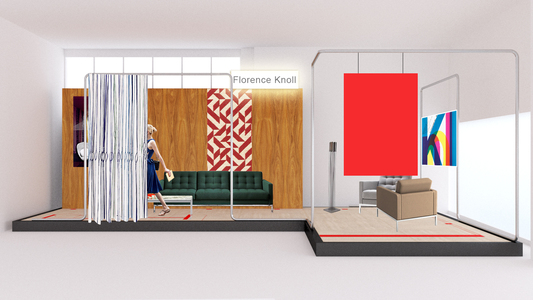 on the occasion of the centenary during the Salone del Mobile in Milan, in the Piazza Bertarelli showroom, through the exhibition “Knoll celebrates Bauhaus” curated by OMA, a studio co-founded by the Dutch architect Rem Koolhaas, with the collaboration of Domitilla Dardi, historian and curator of design, Knoll Knoll recounts the steps of a journey that still today has a powerful reverberation on our contemporaneity.

For the centenary of the Bauhaus, Knoll narrates the passages of a legacy that still has powerful repercussions in our contemporary world, in the exhibition “Knoll celebrates Bauhaus” curated by OMA, the studio co-founded by the Dutch architect Rem Koolhaas, with the collaboration of Domitilla Dardi, design curator and historian, in the showroom at Piazza Bertarelli during the Salone del Mobile in Milan.

“We felt strongly about making this project become a concrete reality precisely during a week of such great importance for international design,” Demetrio Apolloni, President of Knoll Europe, explains. “It is an exhibition that underscores the strong bond between our company and the Modern Movement.”

The Bauhaus, the German school that exerted a unique influence on the modern evolution of design, was founded 100 years ago. The school’s history is intertwined with that of Knoll in various phases, through a figure who is the fulcrum of these connections: Florence Knoll.

The story is told by means of four environments/clusters like theatrical stages, encouraging viewers to participate, in the spirit of the German school’s famous tenet of “Learning by Doing.” Entering the four settings, visitors can have a direct experience of the objects and furnishings that take leading roles, creating narrative compositions that vary in the experience of each and every participant.

“This installation is an attempt to give theatrical form to the multiple relations that connect the emblematic histories of the Bauhaus and Knoll. We have imagined true sets in which different objects exist in an ideal domestic scenario – a meta-interior – offering the visitor the possibility of activating and discovering them. The iconic products by Marcel Breuer, Mies van der Rohe and Florence Knoll are therefore never separated from the modern ideal of everyday functionality, and come to terms with other objects belonging to a wider historical and cultural context.” This is how Ippolito Pestellini Laparelli, OMA partner, describes the project. Furthermore, “Since our first collaboration with Knoll we have set out to translate the motto ‘Modern Always’ in a creative way, paying homage, case by case, to the great masters of the 20th century. This year we have focused on the milestones of a relationship that has been decisive for the construction of international modernism.”

The first cluster is on Marcel Breuer, a designer who experienced the Bauhaus as both a student and then a teacher. His early years of study took place in the context of the contrast between the two different spirits of the school, that of expressionism – with a closer connection to crafts and local folk traditions – and that of rationalism – more international, with an accent on industrial design. Breuer’s choice was that of an entire generation of enlightened creative talents: the international modernity that combined art and technique. His furniture in metal tubing, inspired by bicycle frames, generated works that reflect an authentically timeless vision of design.

Ludwig Mies van der Rohe was the protagonist of the final phase of the Bauhaus, as seen in the second cluster. This is the moment of the rise of Rationalism, of the International Style that set the character of modernity all over the world. The focus in this phase is on the value of projects conceived for a very wide audience; the crucial challenge was to bring quality to the largest possible number of people. Alongside the icons of the absolute Master of Rationalism, from the MR series to the Barcelona chair, the exhibition features objects that symbolize progress combined with essential elegance – cameras, telephones – but also a new idea of emancipated and independent womanhood (embodied by Eileen Gray in design and Coco Chanel in fashion).

The bridge between the Bauhaus and Knoll is the central figure of Florence Knoll, protagonist of the third cluster. In her extraordinary life, Florence shifted from encounters with Gropius and Breuer to studies as the favourite student of Mies. Through Knoll’s production, she brought the icons of the idea of modernity that was the basis of Mies’ leadership at the Bauhaus – and his entire career – to a much wider audience. From this great master, Florence learned the secrets of harmonious design, made not of individual items but of the skilful orchestration of leading roles and extras, all necessary factors in the great project of inhabitable space.

The fourth cluster offers an analytical look at the legacy of the Bauhaus in contemporary design. Our entire epoch, including what has been defined as the Postmodern since the 1960s, has an indisputable cultural debt to the Modern Movement of which the Bauhaus was the emblem. Even those who have challenged the rational approach and the modernist logic have developed their alternatives in reaction to that original design model. In this cluster the theatrical approach is taken to new heights through a dialogue between opposites – represented by furnishing-characters – to create a critical debate on the multiplicity of solutions in our complex contemporary world.

“After this debut, the exhibition will travel to the cities of Paris, London, Tokyo, Seoul and Sydney, among others,” – Apolloni continues – “demonstrating the intention of pursuing our intellectual, cultural and creative commitment with a forceful projection into the future, while never losing touch with all the values that set Knoll apart.”