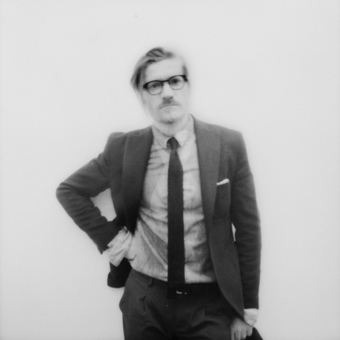 Federico Pepe is a unique example within the Italian cultural and artistic landscape, moving between different forms of expression with cleverness and extreme aesthetic coherence. Advertiser, artist, graphic, designer, video maker and even printmaker, over the years he has collaborated with famous artists such as Maurizio Cattelan, Pierpaolo Ferrari, Nico Vascellari, but also designers like Patricia Urquiola. With Le Dictateur he has worked as artist, curator and publisher.

After some years you realise that there’s a routine at Fuorisalone, like going to Rimini every August.

The version of Federico Pepe about Fuorisalone

I have never been a frequent visitor of the Salone, some years I even took this chance to go on holiday. I think I saw the fair just once and parties make me nervous. In my first project for Spazio Pontaccio, I barely knew what was going on around me. But I find hit-and-run visits very funny, I like to focus only on specific things that are interesting to me.

Many say Milan could be the European city of the next 10 years, overtaking London and Paris. If that was true, it would be thanks to the Expo and especially the Design Week, which has been a benchmark for decades. However, it should start involving designers from similar worlds and include various types of design, besides objects and materials. The design week represents an act of humility for Milan, which in those days has always had a down-to-heart approach. And it is also a great economic opportunity, as during the Salone everything is done really well.

The relationships with all the people I know in the design field grow stronger during the fair. After some years you realise that there’s a routine, like going to Rimini every August. The Supperscene dinner is a nice memory for me, as it was my first real access to the world of the Fuorisalone. Many relationships were born that night that still continue today.

The design week is like a compass turn, when you work there you must find your own rules to follow. Maybe you’re more free in other fields, but here it’s like walking through an arch defining what you are going to be. If it’s not the right time, it might be quite unpleasant

A couch designed by Lorenza Bozzoli. We had an old couch at home, wrecked by our kids. When I saw that couch, a very classic piece with a touch of irony, I immediately fell in love with it and I bought it.

On the one hand, I wish the Fuorisalone remained as it is, keeping a bit provincial. I wish its engine kept going, but I also wish it wasn’t the only one and it opened to new worlds.