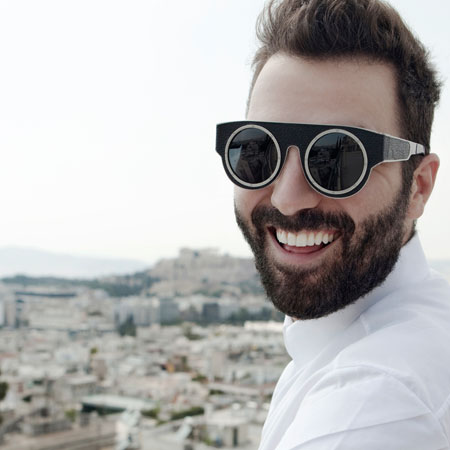 Costas is a volcanic being, a lover of life and beauty, which he’s been describing in words and pictures for ten years on his famous website. Born as a personal blog, Yatzer is today a reference point for searching exceptional projects, from hotels to galleries, from tourist destinations to restaurants, from anonymous objects to design classics.

Fuorisalone gives me the best excuse to pack my suitcase and visit Milan every April!

The version of Costas Voyatzis about Fuorisalone

It gives me the best excuse to pack my suitcase and visit Milan every April!

It defines the Design Week by connecting all the various events throughout the city.

To always keep a diary of the places I want to visit and to be sure to grab the Design Week edition of INTERNI as soon as I find it—it runs out fast!

The place you love the most during Design Week
_

The Cortile di Via Savona which is a unique building, built over a century ago. Although today only the walls remain it has witnessed major events in the country’s history. Personally, I’ll never forget the curtains of water installation during the ‘Luce Tempo Luogo’, a themed exhibition held in April 2011 which was the result of the teaming up between DORELL.GHOTMEH.TANE / DGT ARCHITECTS and Izumi Okayasu with Toshiba.

What and where to eat during the week?
_

If I’m around zona Tortona, then I head to Al Fresco restaurant which is located in an old factory (Via Savona, 50, 20144 Milano).  For cappuccino and dolci I suggest visiting either the newly opened Pasticceria Marchesi, which was designed by the architect, Roberto Baciocchi (Via Monte Napoleone, 9, 20121 Milano), or else the classic favorite, Pasticceria Cucchi (Corso Genova, 1, 20123 Milano).  And since we are in Italy, a stop at the Trattoria Torre di Pisa (Via Fiori Chiari, 21/5, 20121 Milano) is a must-visit for at least one meal during the design week for its Spaghetti alla Siciliana.