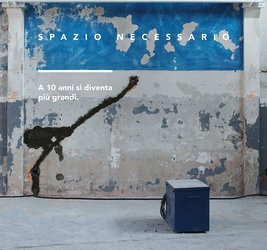 Celebrating Lombardini22 first 10 years of growth and success. A party to welcome the future, added value and trust, which will be generated all the time in every project and every meeting. We will be celebrating the Lombardini22 Group’s first 10 years in business on Thursday, 6th April, during the Milan Furniture Show. It will be a memorable occasion, when we will also be officially opening the new extension to the firm: a “Spazio Necessario” catering for movement, development and growth.

Over these 10 years, Lombardini22 has developed a carefully structured growth and acquisition strategy, which has made it the third biggest architectural design company in Italy. This exciting growth over the last few years has resulted in the doubling of both our turnover and the number of professionals we employ.

Lombardini22 has always chosen to stay together, side by side, under the same roof at the same address. Strengthening its own identity, so deeply entrenched in the Milan area, and reinforcing those fundamental values characterising the firm: transparency and respect, teamwork, business relations with clients, quality, curiosity, and the quest for value. All this is embodied and made visible by this physical space. It is working partnerships and a wealth of different business relations that add such value to Lombardini22’s work. This has resulted in the creation of an inclusive and open group, experienced and naive, which generates energy, collective intelligence and curiosity. The group really works, it attracts by its very nature, people are drawn to and unite around it.

“A need for more space has arisen”, so the president Paolo Facchini explains. “The physical space in which the group works together - which is favoured in preference to virtual space - has always been the distinguishing trait of our identity: frugal spaces, blank boxes to be inhabited and lived in. It is we who fill them”.

Franco Guidi, the Group’s managing director, remembers the claim that was made at the very beginning: “Lombardini22, Italian architecture’s new address. It was the beginning of 2007. 10 years later we are still making this claim. In fact, we are claiming even more. The address is the same, but it is being doubled in size by a new necessary space (Spazio Necessario)”.