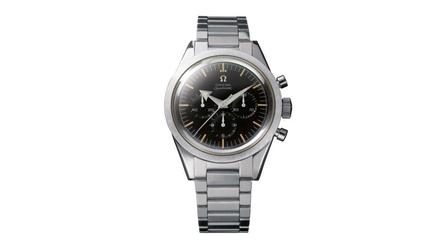 OMEGA celebrates the 60th Anniversary of the most iconic chronograph ever. Built for speed, it was intended not for rocket ships, but for racing cars. The Speedmaster became the astronauts’ choice. For more than half a century it has been there for momentous times such as the lunar landing in 1969.

I am more than a watch. I am a pioneer of history and a titan of design. I was built for the racetrack yet my reputation was born in the stars.   On the wrists of legends, I have soared above clouds and touched the surface of the moon. I have voyaged to the ends of the Earth and conquered every pole. My life is one without limits. Even in the harshest environments and the most brutal tests, I have defied danger to rise unscathed and prove my reliability time and time again. But my journey is not finished yet. I have more adventures to find and new paths to explore. My name will continue to endure and my style will live on forever. I am more than a watch.

I am the OMEGA Speedmaster.

This is my story.

Find the event
on map
VIEW THE MAP
See also...
STILL MOTION STILL MOTION Korea Craft and Design Foundation Between Serenity and Dynamism: Korean Ceramics KitchenAid The Serious About Food Kitchen Lab Abet Laminati An Imaginary City The Courage of Their Age. The Individuals and Values of the Modern Movement
MAIN SPONSOR