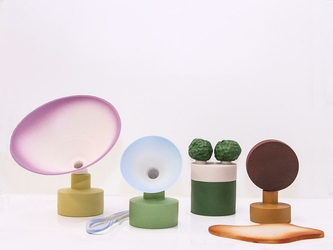 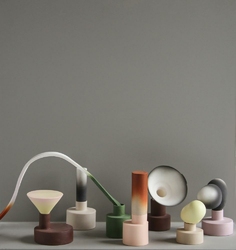 The laws of physics no longer apply, and the force of gravity has no power over the architectures built by Mia. In a precarious equilibrium, corners rest on smooth curves, and cubes and cylinders project far too far, but nonetheless they don’t col-lapse. And then there is colour, the same on all surfaces, or with the brightest and most playful tones that could ever be found on a palette. Her monochrome compositions highlight reflections, roundness and edges, creating mysterious and unreal scenarios. In their most pastel variants, they perhaps recall the delicacy of brush strokes by Giorgio Morandi, the silence of his compositions created from vases and jugs placed on a worksurface in his dusty studio. The use of colour and the appli-cation of geometrical forms with a varying degree of irregularity lead to abstraction, something that is becoming increasingly noticeable in the artist’s work. Some of her objects could have tumbled out from a painting by Kandinsky, linked to the simplicity of the circle, triangle and square, but there is something that enriches them and makes them more complex, interrupting the banality of normality and revealing the enjoyment of creation and making unusual objects.

When colour is an important feature in sculpture, you can’t help thinking of some Metaphysical work, such as Mauvais génie d’un roi (1914-15) by Giorgio De Chirico, with whom Göransson’s pieces share the Greek classicism, the use of pedestals, and the central perspective, made purposely ambiguous. Some of her ceramics are like Muse inquietanti (unsettling Muses) that seem to be observing each other, or they are simply elongated ovoid forms, recalling living, possibly alien life forms. Her references to Ancient Greece, classical statues, columns and temples are in relation to contemporary sculpture, creating miniature sanctuaries and altars, devoted to the gods of an unknown future.
In the more complex installations, arranged on successive levels and housed under transparent cases, there are some unusual, surprising objects that provoke curiosity whenever you see them. An enchanted forest? A forest of motifs? Objects that have fallen to earth from another galaxy? The forms, colours and textures seem to speak the language of dreams, as if in a 1920s Surrealist painting. Mia E Göransson is in this sense a visionary, a dreamer, who suggests a playful design; her works could be children’s toys, or models of enigmatic cities of the future. Moving natural surroundings towards abstraction, the artist creates a new deconstructed nature, that is real, solid and objective, as Ettore Sottsass said: “Nous avons réalisé des ob-jets concrets pour exprimer des idées abstraites ... et ils ont tous fini dans des galeries d’art. “

There are obvious echoes of radical design currents from the 1960s and ‘70s: an approach to design that overturns preceding typologies, no longer reflecting purely rationalism and functionality, moving away from minimalism and industrial aesthetics, and rather trying to evoke emotion. From the early 1980s, the revolu-tionary design by Sottsass’ Memphis group and his colleagues Michele De Lucchi, Alessandro Mendini, Matteo Thun, Aldo Cibic and Arata Isozaki, to mention just a few, was hallmarked by forms that were allegories of thoughts and aspirations.
There are also references to the imaginative, futuristic constructions by artist and designer of French origin Nathalie Du Pasquier (who in the past was a member of the Memphis group), but with more emphasis on the repetition of patterns and chromatic motifs. Other comparisons can be drawn with the very fragile sculptures in lightweight paper, glue and plaster by British artist Karla Black, with their pastel colours..

Mia E Göransson does not succumb to the laws of geometry or technology. She says that her research and her use of materials, such as ceramics, are always experimental, and she likes to leave the door open to chance occurrences: “The stimulus of unexpected results is an important part of the process.” Branches that become arches on pedestals, apples with holes, meteors, forbidden fruits, upturned vases, hard, wavy clouds fixed to the ground by geometric solids. From darker tones to candy pink, from bright, solid hues to blended colour, the range seems to be endless.
So the same quest for something unusual can guide us in our journey or in the performance to which the artist invites us. During the process of observation, we enjoy being amazed by a bizarre geography, by rarefied or concentrated elements of surprise, by profiles that we have never seen, though we have dreamed of them from time to time.